Kicking Plantar Fasciitis to get Back in the Game: Jack’s Success Story

“It’s good to see him playing the way he used to. Watching him trying to fight through the pain was hard.” – Suzie, Jack’s Mom

Jack is very active teenager. From soccer to golf he loves to be outside. But sudden, sharp pain in his foot nearly stopped Jack from playing the sport he loves. “It started hurting when I was playing (soccer) and after about a month I realized it wasn’t going away. I would start running and doing drills, but I wasn’t able to do the full practice. I still played, but it hurt.” Jack’s mom, Suzie, had an idea about what the problem might be. She chose Direct Access at Phoenix Physical Therapy’s Charlotte, North Carolina clinic to begin immediate treatment for Jack. Direct Access means patients can be evaluated and treated by a Physical Therapist without needing a practitioner or other healthcare provider’s referral. Direct Access laws vary by state. Your Phoenix Physical Therapy Patient Care Coordinator can explain how it works and determine if you’re eligible.

An evaluation of Jack’s feet quickly pointed to what Suzie suspected: plantar fasciitis. Jack remembers that day. “They started by looking at my feet. The 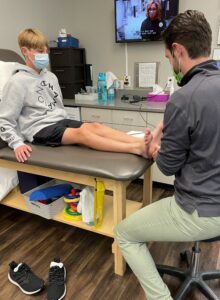 y wanted to see how I could walk and do exercises. I was massaged with a metal tool. It tickled a little. They thought I had plantar fasciitis.” Suzie was concerned, but felt confident physical therapy could help once Jack’s therapy team created his individualized plan. “I was happy to have an answer. I had a feeling that’s what it was. To have someone say for sure, this is what’s going on and we know what to do to help him was great.” Jack’s therapist was not surprised about the diagnosis. “Between soccer, golf and all his other activities he’s on his toes a lot. It’s not uncommon. The fascia is at the bottom of the foot. It connects y 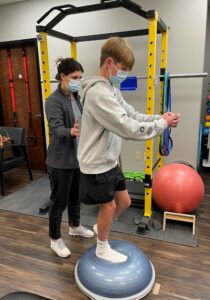 our heal into the toes and acts as support for the muscles and the tendons. One of the classic signs of plantar fasciitis is feeling pain first thing in the morning when you get out of bed. It will be difficult to take those first steps. And at the end of his workouts, Jack was having a lot of pain. It’s really heel pain that sometimes radiates into his toes.”

Jack’s treatment started immediately. “I would come in and do a warmup on the bike for 10 minutes. Then they’d use the metal tool and then we’d go into stretching and stuff.” Jack was tired after his sessions, which is normal, but it meant his therapy team needed to create an appointment schedule that allowed him to keep up with school and soccer practices, while still giving him enough time to recover. Despite being a little tired and sore, Jack loved going to physical therapy. “I was excited! Marilyn Dang, the Patient Care Coordinator, welcomed me when I first came. It was a fun experience overall. They made me feel comfortable. I wanted to go and it was pretty fun.” Suzie knew she chose the right facility for her son. “He felt like he had a workout; he was even sweating after his sessions. We were getting up early to get there before the day started and he didn’t complain about it.”

Jack’s therapists made sure they knew his long-term goals. They didn’t stop at just resolving the pain. “Once we controlled his symptoms and pain we moved to balance and strengthening. We did a lot of plyometric training which are explosive moments that will c 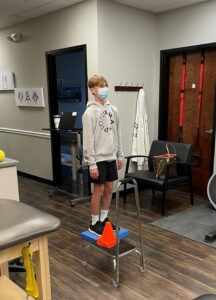 arry over to soccer. Those basic strengthening things are important to address as teens are growing. Not a lot of kids focus on that kind of thing. We can train on correct body mechanics which leads to improvement down into the foot, so he likely won’t experience this issue again.” Jack enjoyed the full body training. “I did some exercises for my hips and legs with an exercise band. I had to walk down a hallway. Then, I’d stand on an exercise ball and bend down and touch the cones.”

Jack spent about 10 weeks with his Phoenix team, but could feel the benefits of his therapy several weeks in. “After a little while, I went to one practice and didn’t feel pain. It was an awesome day. I could do everything!” Now, Jack is back on the playing field pain-free and stronger than before. “I’m able to play defense now, without any problems. I’m focused and able to do my best.” Suzie is thrilled with the solid results she can see. “As a spectator I could tell he wasn’t playing at his best because he was hurting. Now, he’s back to where he was without pain in his feet. It’s good to see him playing the way he used to. Watching him trying to fight through the pain was hard. It was a little bit of a challenge, and we are past that now. He just has to keep doing his home exercises.” A home exercise plan is included with most therapy regimens. It can keep a patient on track, giving them the power to control and resolve their pain. 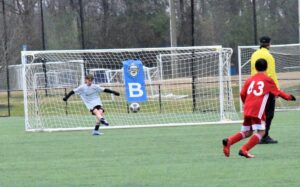 Suzie knows making decisions about healthcare for your child can be a difficult, but offers this advice about physical therapy, “I think it’s definitely worth trying. I 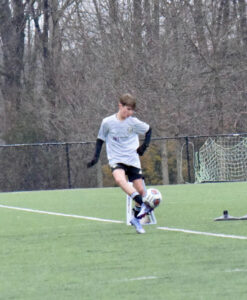 t’s safe; it’s not invasive. A lot of doctors recommend it. I believe and trust in it. It was definitely the first step in making him feel better and resolving his plantar fasciitis. And there is good energy at Phoenix PT – Charlotte. There is a sense of community when you walk in the door. We will definitely go back if we need to!” Jack is thankful his mom chose Phoenix. “It was a good experience. It helped me get through my pain. If you have pain, tell your parents about it, and get help!”