Back on Top of the Mountain – Dan Skodol’s Success Story

“You let your guard down, you’re home free. I just finished a run and caught an edge, and very quickly took a big tumble.” A day of skiing quickly turned awful for Dan Skodol. “I imagined a broken leg would be excruciatingly painful, but I wasn’t sure it was broken.” It was. Dan’s surgeon said the break to Dan’s tibia was likely caused by the force of his thigh bone driving into the top of his tibia. Dan was tobogganed down the mountain and rushed to the hospital. There he learned his leg was broken in multiple places. He had one surgery the night of the accident to stabilize the bone while the swelling went down. Then he had another surgery, 2 weeks later. “It included screws and a plate to get everything back together. The doctors said it was rough, but they expected a full recovery. I’m a runner also and skiing was the thing I most wanted to do again.” 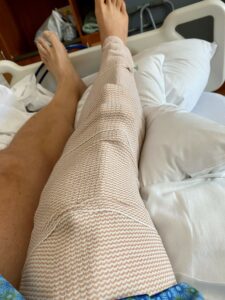 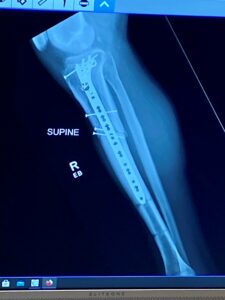 After 14 weeks on crutches recovering from major surgery, Dan lost most of the strength and flexibility in his leg. His doctor recommended physical therapy. “I was on crutches for my first evaluation. I was really just using them for support. The very first thing that (my Therapist) told me was, ‘you’re going to have to ditch your crutches’.” Dan’s Physical Therapist wasted no time leading Dan down the road to recovery. Dan recalls each session was packed full of exercises. “Stretches, the stationary bike, stepping exercises, squatting, the leg press machine. I didn’t truly hate anything. There were some awkward and hard to replicate stretches. My hip flexor is nothing I’ve ever paid attention to before, but (my Therapist) had me stretching it. (We did) obstacle courses and used stretch bands.” Dan noticed the progress he was making. Each week, he felt stronger and was able to do more. “I would often come away from an hour-long session and without fail, days later, I was still very sore. I thought that was a good sign. It’s not always apparent right away, but when something is working you’re going to feel it.”

With help from his physical therapy team, Dan’s hard work paid off. And you don’t need to look far to see what kept Dan going during his rehabilitation journey. “We had a baby while I was on crutches. The accident happened while (my wife) was 7 months pregnant. I regained the ability to do a lot of day-to-day things very quickly with PT.” Dan also found extra motivation during his therapy sessions in the clinic. “I liked being in a room with other people who were working on a goal. I thought I’d be by myself, but that wasn’t the case. It was motivating. Everyone was there for the same purpose. I never dreaded going or doing the things I needed to do. I made a large amount of progress in a short amount of time.”

Dan looks back at his time in the clinic fondly and is grateful for the help he found there. “The people are very approachable. You can be open about how you feel on a given day. They were very receptive when I wasn’t having a good day. They modified and were very flexible. They listened to you and adjusted to get things back on track.” 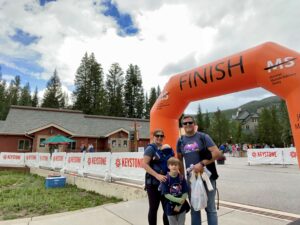 Dan says he’s not back to 100% yet, but he is able to do many of the things he’s been wanting to do like swimming, biking, and hiking. In fact, Dan, who lives with Multiple Sclerosis, successfully completed an MS fundraising hike on the very mountain where his skiing accident took place. Now, Dan is looking forward to skiing again, which his doctors have no doubt will be possible. Possible, thanks to physical therapy. “I would say (PT) is important and it’s undoubtedly a challenge. But it’s good to challenge yourself to feel normal again and get back to where you started. It’s interesting and fun.” 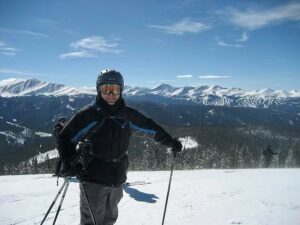