Safe, Confident and on the Road to Being Pain-Free Again: Kay Fritzsching’s Success Story

Kay Fritzsching has always been active. She loves yoga and walking on the treadmill, and knows exercise is important as you age. “I’m 68 years old. As we get older we lose muscle mass. It is just one of those things that you don’t notice until you go to do something, and you can’t do it anymore.” Kay began to notice pain in her hip. It stopped her from doing the things she loved to do, so she asked her doctor for advice. Kay’s doctor prescribed physical therapy to see if it would alleviate some of that pain. She chose Advanced Physical Therapy Center, part of the Phoenix Physical Therapy family, in Grand Blanc, Michigan. She had been to Advanced PT before and so had her husband. It was an easy choice to head right back to the PT team she knew.

Kay was shocked when she realized how difficult simple tasks had become. Physical Therapist, Jason Sosnowski, PT, DPT began her sessions with strengthening exercises that mimicked those tasks. “I could barely stand up from sitting in a chair. It was very difficult. I could do it, but it was very difficult. And that’s what made me think, oh my gosh, I’m going to have to be doing this in pain for the rest of my life. Getting onto a toilet seat and up from the toilet were just a few of the things I had trouble doing.” Kay continued therapy, which included home strengthening exercises, for several days. But the pain became too much. Tests revealed her hip joint had progressed to being bone-on-bone and replacement became a necessity. 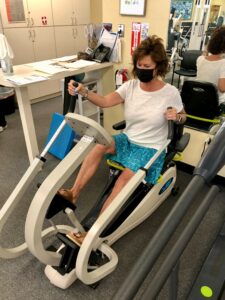 The physical therapy sessions Kay did before her surgery were not a waste. In fact, Kay feels they prepared her for rehabilitation, post-surgery. “I was very fortunate to have Jason give me an exercise routine before the surgery. I noticed that if I hadn’t done that, my muscles would not have been as strong going into the surgery. I did similar exercises before and after surgery. Because I had done them before I knew what I was able to do then, and what I couldn’t do after the surgery. It was so helpful.”

According to the American College of Rheumatology, 450-thousand hip replacements are done in the United States each year, and post-surgical physical therapy is recommended for nearly every case. While the surgery takes care of the joint problem, the surrounding muscles need to be stretched and strengthened to properly support the new joint. Kay’s post-surgical rehabilitation was eight weeks of hard work. “The first two weeks I felt like I wasn’t going anywhere. The third week I felt better. The fourth week was even better.” Her therapy sessions included leg lifts, working with weights, and walking practice using a walker, then a cane, and then without any support. Kay remembers Charles Hubbell, PTA helping her with some tough decisions. “I wasn’t really sure about when to progress from one thing to the next, and Charles was the one who suggested moving from the walker to the cane. If I hadn’t had his guidance, I would have used it improperly. I could have delayed progress. At one point, I told him I forgot my cane at home. He laughed, watched me walk the circle, and said, ‘You’re fine. You don’t need that cane.’ I wanted to jump for joy. I didn’t want to be dependent on something.” 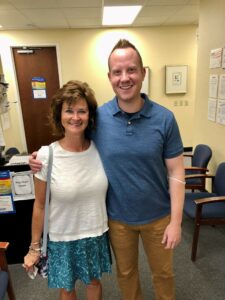 Charles continued his work with Kay guiding her each step of the way, which she believes is essential after going through major surgery. “(Charles) was able to tell me when it was time to go a little bit harder. One time, we added a weight that was heavier, and I was sore for two days. Charles said, ‘No problem, we will drop it down again.’ He listened to me. That’s so important to listen to the patient. I didn’t want to be a wimp either. I told Charles if he thought I should be doing something we should work on it.” Kay is grateful for the entire Advanced PT-Grand Blanc team. “I felt like I was coming to a place where I was accepted. The girls at the front desk call me by name and were sincere about it. I got to know several staff members and they were so kind. It’s like a family. That is so important. When you are down and out, and your body is against you, you need a cheering crowd to say, ‘It’s against you now, but you will get better. You can do it.’ I thoroughly trusted them because they really know what they’re doing. I felt safe and confident.”

Kay is now back on the treadmill and doing her PT exercises daily. She is also working more yoga into her routine. “My other goal is to exercise even more than what I’m doing now. I would love to play pickle ball and do more walking. I can’t wait to be able to walk anywhere and do anything without any pain at all. I have to be patient. It’s not going to happen overnight. Hip replacement recovery is usually a full year. It takes time.” But Kay believes physical therapy gave her the strength to continue her recovery journey and succeed in getting back to doing all the things she loves to do. “You need to do (physical therapy) in a good healthy environment. You can’t just do the exercises at home. Sometimes I would do the exercises wrong and Charles would stop me. It’s easy to forget what you need to do. You need guidance and to be led. Sometimes you can get lazy too. For a healthy recovery you need the support and I feel good that you get that at Advanced. I hope I don’t need to come back for a long time. But if I need to, I will come back here.”