“Yes of course I’d recommend Advanced. I choose to come here because of the people. I feel at home here.” – Ken Taylor, Advanced PT, part of the Phoenix Family – Waterford Patient 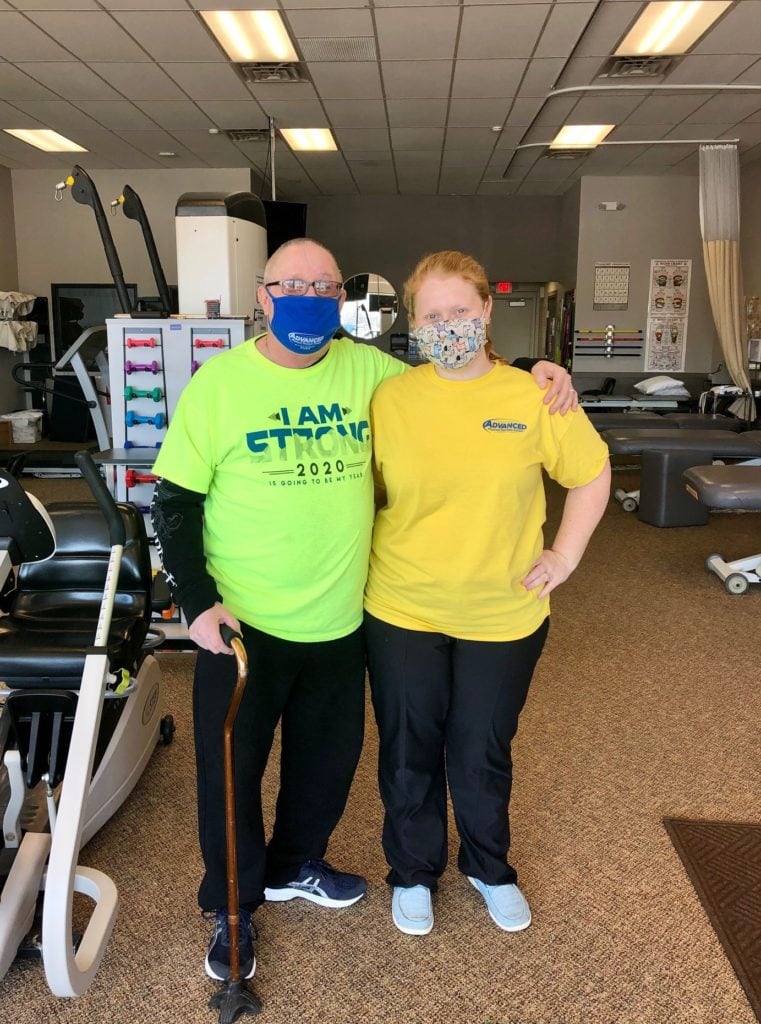 A split-second decision by Ken Taylor likely saved two lives on April 13th, 2020. “I’ve done it a million times. I was driving down a mountain, coming down to an S-Curve.” But this was not like every other time. Ken looked down and took a deep breath, remembering, “I went to slow the truck down and there were no brakes.”

Ken was driving a semi-truck hauling 44-thousand pounds of mulch in the mountains of North Carolina. He had three choices: drive off a massive cliff to his death, try to take the curve without brakes in the on-coming left lane, potentially killing someone driving toward him or lay the truck down. Ken described what happened next, quickly turning an imaginary steering wheel in front of him, “I whipped the front of the semi and laid the truck on its side. I slid and took out 120 feet of guardrail.” 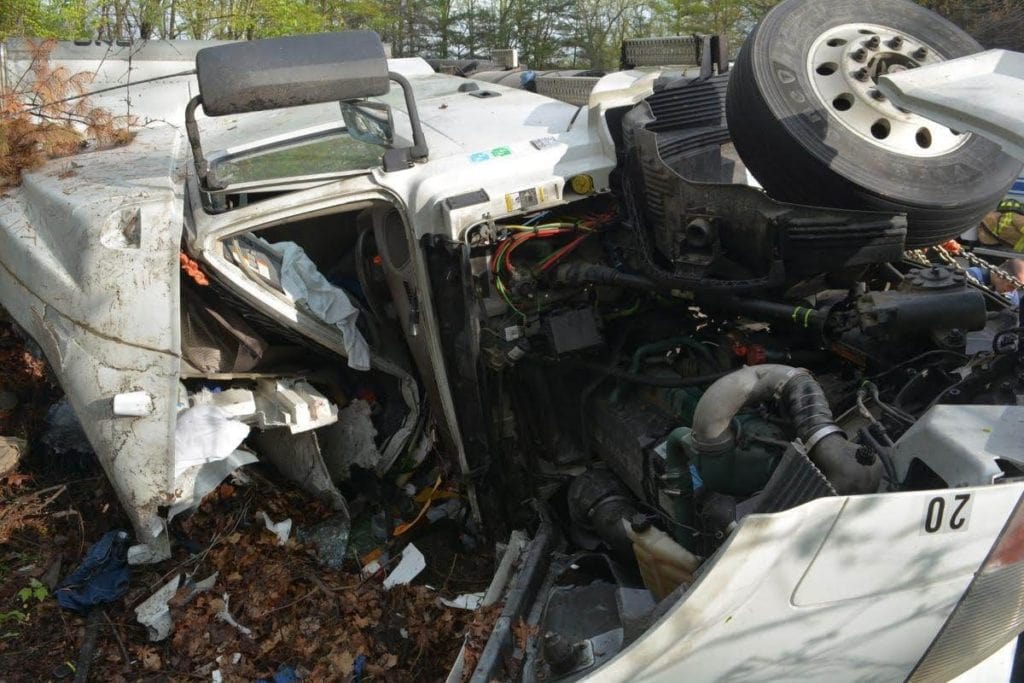 Ken was alive, but badly injured. The semi was unrecognizable. Ken recalls hearing someone yelling to him, “Hey! Is anyone in there?” It was Jerry, the man driving in the oncoming lane when Ken made the decision to lay the truck down. Ken saved Jerry’s life.

Jerry called 9-1-1 and helped Ken by making him more comfortable with coats from his car. While they waited for emergency crews to arrive, Ken realized something was very wrong with his face and head. A massive gash left the skin of his forehead falling into his left eye. He struggled to see. Ken asked Jerry to call his wife, Tammy, who was in Michigan. The two talked, but neither had any idea the extent of Ken’s injuries. It took over an hour for the rescue team to cut Ken from the semi. As they brought him to the hospital, Tammy picked up Ken’s mother and the two raced from several states away to see Ken, but their journey ended at the front doors of the hospital. COVID kept Tammy and the rest of Ken’s family from seeing him for several more days. There was little communication with doctors during that time, so Tammy remained in the dark about what Ken was going through.

On discharge day, outside the hospital, Tammy was handed a folder full of medical papers by hospital staff. Each page documented the numerous injuries Ken suffered and the procedures he endured over the last few days. Tammy sifted through a few but did not fully understand what each meant. Still not knowing exactly what Ken had been through, the painful three-day journey back to Michigan began. It was only when Ken saw his doctors in Michigan, did he and Tammy realize how serious his injuries were.

The list was massive. Ken fractured three bones in his back, he snapped both bones in his right forearm, he fractured his neck, his nasal bone, his sternum, and his shoulder blade and his toe was crushed. Ken also suffered a traumatic brain injury and that gash he felt the day of the accident required 14 staples and too many stitches to count.

In the coming weeks, Ken would have 5 major surgeries and even more minor procedures to set him on the road to recovery. His doctor also prescribed physical therapy to begin the long process of regaining his strength, function, and range of motion. 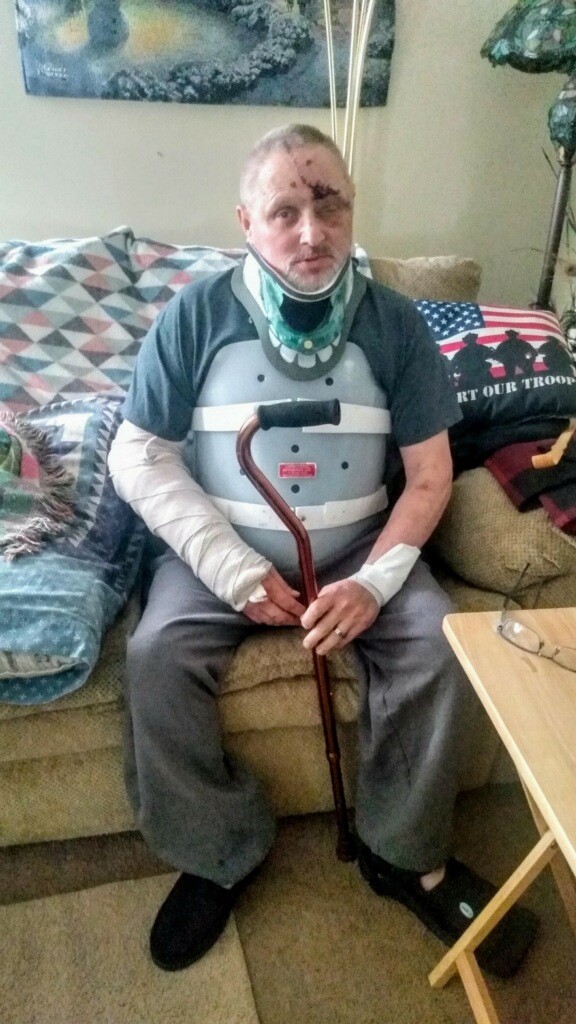 Ken started at Advanced Physical Therapy Center, now part of the Phoenix family, in May. Ken didn’t have a lot of expectations but recalls, “I just knew I needed to get out of the house and do something. I’m not a quitter, as you can tell. I knew I was coming here to work hard on it and that’s what I did.” On the day of Ken’s first appointment, he could barely walk from the car to the front door of Advanced PT – Waterford. He wore a clamshell brace to keep his spinal column stable and still wore numerous bandages covering surgery incisions and lacerations from the accident. Shelley Hanchett, PT, CHT and Jill Heberling, LPTA documented Ken’s challenges, measured his abilities and noted his long-term goals. Then, they created a plan to help Ken get back to living the life he deserves.

Over the next few months, Ken worked hard, using the NuStep cross trainer and the MedX lumbar strengthener, while Jill used manual techniques on his neck and back. Kim Cochran, OTRL, joined Ken’s rehab team to work on his hand and wrist. Heather Pantea, OTRL focused on his shoulder movement, giving him the ability to use his right arm again. Ken reveals, “Do you know how excited I got when I was able to touch my nose!” While his forearm movement is still limited and he may never regain full range of motion, his occupational therapy team brought him to a point where he can perform many daily tasks.

Ken recalls getting discouraged at times but remembers how Jill was right there to push him, “She is always encouraging me. She says encouraging things like you’re doing great, and I can’t believe you are even the same person.” And a different person is right. Now, Ken can walk through the store; he can turn his arm fully. His strength is back, and the pain is disappearing.

When asked about what he would say to someone who might be apprehensive about trying physical therapy, Ken says, “Get your butt in here and work whether you like it or not. If you want to physically and mentally get better, then you’ll come here and you’ll work, and people here will be behind you and support you and give you the encouragement and motivation that you need. You need the motivation to get better.” 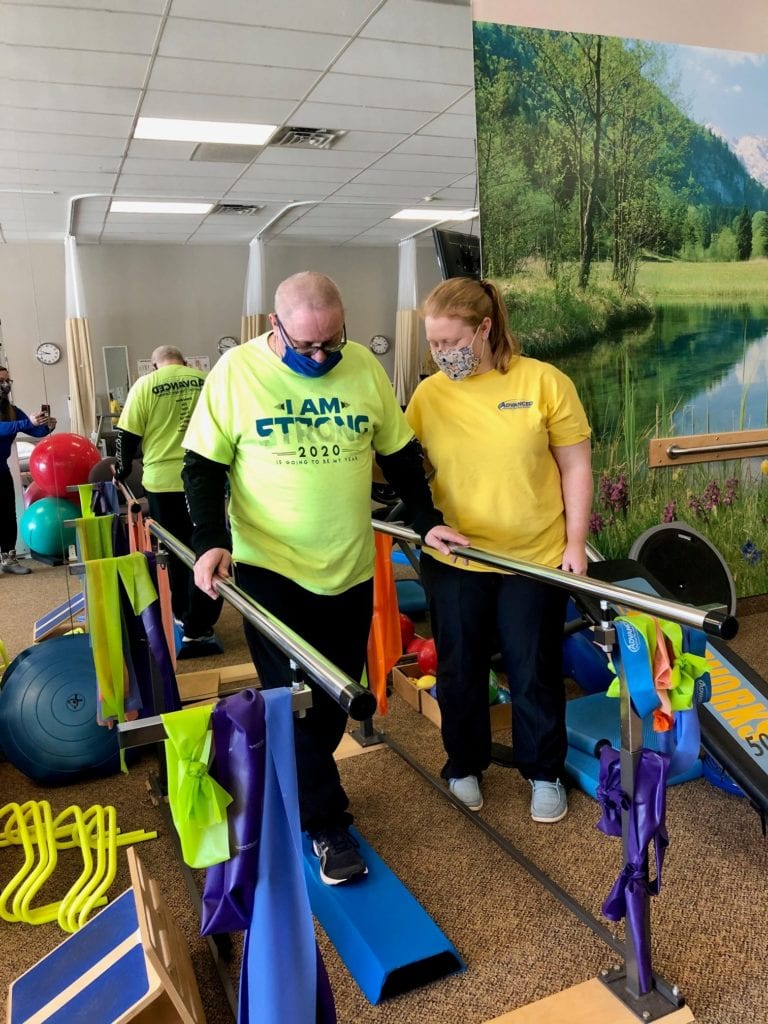 Tammy, reflecting on the recovery mountain Ken is still climbing, chimes in with, “Understand it’s a slow process, but don’t get frustrated. Each session you get a little bit better. You may not see the progress immediately, but it will come.”

Ken is using his downtime to write a book chronicling his life. He says it has been therapeutic to look back and reflect on the choices he has made. Ken is working on healing his mind and body and Advanced PT is proud to be part of his remarkable journey.