“There was a day I walked three miles. Three days later I couldn’t walk from my bedroom to the bathroom and that’s when I knew I was in trouble.” – Alice Knox, Flint, MI Patient

When Alice was a very young child, doctors said her life expectancy would be 13 years. At 74 years of age, Alice Knox walks into Advanced Physical Therapy Center, part of the Phoenix family, a married woman of 54 years, a mother of two and a grandmother. Alice reflects, “I was raised by a mother who was determined. I’ve had multiple diagnoses, but every time my mother heard about a new doctor and treatment, off we went.” After years of uncertainty about what was affecting Alice’s ability to move and function normally, it was determined she had a form of Parkinson’s Disease. Her doctor prescribed two medications. “They stopped a lot of the tremors, the dyskinesia, but it gave me back a normal life. By that time, if people didn’t know that I had a neurological dysfunction, they couldn’t tell.” Alice was in remission for most of her life. “A few times I would go out of remission. They’d mess with my meds, and I’d go back into remission. They told me my disease would eventually come out of remission and I would never go back in.” That day eventually came. “There was a day I walked three miles. Three days later I couldn’t walk from my bedroom to the bathroom and that’s when I knew I was in trouble.”

Alice’s doctor ran tests, and it soon became clear the symptoms of Parkinson’s were here to stay and remission would not be possible again. Alice’s doctor sent her to Advanced PT – Flint to try an innovative physical and occupational therapy program called LSVT-BIG. LSVT-BIG helps to increase strength and motor learning, and address changes in brain function in individuals with Parkinson’s Disease and other neurological conditions. Each treatment focuses on the production of large amplitude whole body functional movements. Alice had never heard of LSVT-BIG, but that did not stop her from trying it. “I was hopeful, because I had absolutely nothing to lose and everything to gain.”

On day one, Alice met Nancy Harrington, PT and Dana Fletcher, LPTA. “I told Nancy and Dana when we started, I don’t want to waste time doing things that are too easy.” Dana looks back on their sessions. “She definitely pushed herself. She would say, ‘nope, that’s too easy’ and we’d have to do something else.” The program includes 16 sessions: four consecutive days a week for four weeks. There is daily homework as well. Many of Alice’s exercises included arm swings, sitting to standing movements and large leg movement exercises which gave her improved balance, trunk rotation and bigger walking steps. Dana remembers how quickly Alice showed improvement. “That first week! The second week she was doing things that Nancy and I were blown away with. She’s very determined at home too. She was very good about doing her exercises at home.” Alice couldn’t believe what she was able to do. “One of the things I can do now, that I could never do before was coordinate movement with opposite extremities.” 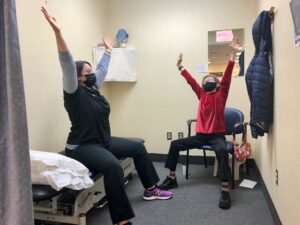 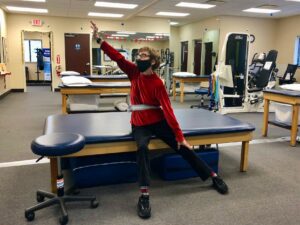 A teacher for 31 years, Alice understood people learn in different ways. She was pleased Dana and Nancy were flexible with their teaching methods. “They let me break (the exercises) down into smaller pieces. When I tried to do the entire movement at first, my brain didn’t process it. They said break it down into any way that works for you. We started small with each part and then put it all together. They were flexible and they would listen to me.” Dana is quick to point out, “Just as much as I gave her suggestions, she gave me suggestions.” Alice completes Dana’s thought. “She has changed and modified things in the book to fit me! She was my miracle worker. She and Nancy are like family now.” And Alice’s own family has her back every step of the way too, including her husband Bob. “Bob has been my rock. I cannot tell you how many waiting rooms and offices he has sat waiting for me. We’ve been married 54 years.” 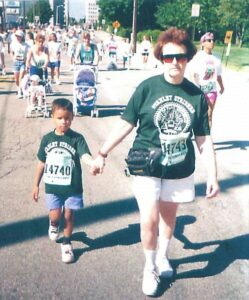 Alice arrived for her first LSVT-BIG session using a walker. After her 16th session, she confidently walked out of Advanced PT – Flint knowing she had the tools to help herself stay active long-term and battle her Parkinson’s symptoms head on. “I don’t understand why this building isn’t full to overflowing with Parkinson’s patients because this program has literally changed my life. You can get better. You don’t take Parkinson’s away but there can be a better way to live with it. And living with it is what you have to do. Come here, get better. Nobody here makes any judgement about you. When I came in here, I was barely able to walk at all and now I can. I know I can get better yet. I want to be able to walk the 8k Crim again. I want to be in downtown Flint and have that bib on and wear whatever new shirt they have for the Crim next year and I want to be able to walk again.” Dana is confident Alice can accomplish that goal saying, “I plan to be there cheering you on! We had a lot of fun. It makes my heart happy.” 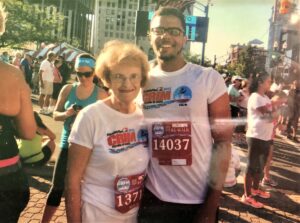