“I went to my family doctor, and he sent me to an orthopedic doctor. He asked if I wanted to try physical therapy. I never knew PT could help.” – Debbie Howard, Phoenix Physical Therapy Patient

Unbearable headaches and neck pain was a part of Debbie Howard’s life for six years. After one therapy session at Phoenix Physical Therapy in Bellwood, PA, Debbie finally felt some relief. Sound too good to be true? Let’s start at the beginning.

Debbie battled daily pain for years. “I couldn’t function. For years I couldn’t turn my head completely to the left side. They told me there was a disc that was messed up.” A neurologist suggested steroid injections, but Debbie remembers thinking, “I didn’t like the idea of getting injections in my neck,” and she told the doctor she would wait until the pain became unbearable. That day came. Debbie told her husband she had to do something. Her family doctor sent her to an orthopedic specialist who offered the injections once again but also recommended a round of physical therapy. Debbie was hesitant, not knowing what to expect or whether it would work, but decided to give it a try.

Debbie spent some time researching physical therapy clinics. Ultimately she chose Phoenix. “Honestly I had never heard of it before. I had to pick one, because of my insurance. I’ve been to other ones. They were big and fancy, but not personal. Phoenix isn’t a real big place, but it’s very welcoming. They make you feel good going there.” On Debbie’s first visit, she met Lori Seiler, MPT and Bellwood Clinic Director. Lori remembers that day well. “Debbie was a little unsure about therapy at first; she had tried it before with no success.” But Lori was able to put her mind at ease, even achieving some pain relief during her very first session! “She was so excited to leave the first day with a significant reduction in her headaches. She was so grateful.” So, what worked? Debbie describes a session: “Lori does (manual cervical traction) with her hands. Oh, my goodness what a difference.” Manual cervical traction can help separate the bones, discs, and joints in your neck which takes pressure off the nerves that are causing pain. It can also relax and gently stretch your neck muscles. Debbie was also treated with heat therapy and Transcutaneous Electrical Nerve Stimulation or TENS, which is a therapy that uses low-voltage electrical current for pain relief.

A significant portion of Debbie’s recovery was learning how to relieve the pain herself for long-term relief. “(Lori) showed me stretches with my neck to do on my own. She taught me how to find relief myself! It’s been good. I’m very pleased and happy with that.” Debbie reveals she wishes she would have known sooner physical therapy could help with headaches. “After 12 sessions of therapy I have relief. It’s such a relief. After my very first session, Lori said, ‘how do you feel?’ I said, no headache! Finally, relief!” 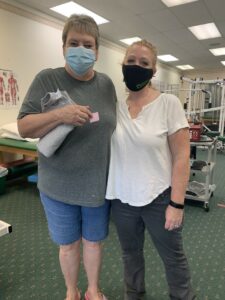 Debbie’s advice to someone who may be on the fence about trying PT? “Go! Give it a try because it works.” Debbie says she will continue to do the stretches Lori taught her to find relief herself. She also returned to Phoenix Physical Therapy in Bellwood for another issue, saying “I feel better going to a place like that than going to a place where you are just another patient. They know who you are. They talk to me like they’ve known me for years. And I Like that.”