Emma Ruley has her whole life ahead of her. She is a biology major and a college athlete. But a stroke at the age of 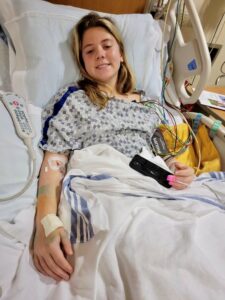 17 almost took all that away. “I woke up in the middle of the night and I couldn’t feel my right side. When I got out of bed, I fell because I couldn’t use my right side. I crawled down the stairs in tears. I did not know what was going on.” Emma’s mother heard her cries. She was in disbelief. Emma remembers showing her how she could not hold her phone. “I put my phone in my right hand and it just rolled off my fingertips. She brought me into her room to show my dad and figure out what to do.” Emma’s parents brought her to the closest hospital. It was midnight and very few specialists were working, so Emma had to wait a grueling nine hours for doctors to reveal she had an ischemic stroke.

Emma needed expert help. She was airlifted to Christiana Hospital in Newark, Delaware where a specialist determined surgery needed to be performed immediately. “There was a blood clot, and it was traveling down the ocular side of my brain. If they waited, I would be blind. I said do whatever you can to pull out the clot.” The surgery was a success. “I woke up in the hospital bed. My right arm was taped up from the incision. They didn’t have to go through my head. They fed a catheter through my wrist to my brain and pulled out the clot. I was there for a week. I got various blood tests and other tests to make sure I would be ok. That’s when they discovered a hole in my heart. They told me the hole in my heart wasn’t the cause of the stroke, but it allowed the clot to travel to my brain.” The hole would need to be repaired, but not until Emma was stronger. 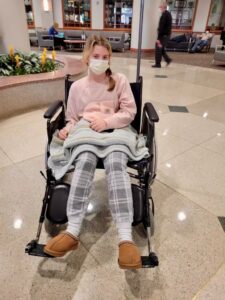 Emma’s doctors sent her home with some medication and orders to begin physical and occupational therapy. “I couldn’t run. I couldn’t use steps. I could shuffle around. My arm was usable, but everything was slow and heavy. It was really hard to move.” Emma and her family chose Phoenix Physical Therapy in Selbyville, Delaware. Emma had been there before, working with Clinic Director, Dominick Policare, PT, DPT.  “I play lacrosse, and during a game I injured my knee. I really enjoyed the experience. Dom included agility stuff to make sure I was getting stronger and ready for field hockey season. He had a great program. So, when I had the stroke, I wanted to go back to him. I was already comfortable with him.”

Emma’s first therapy session was about a week after her stroke. “Dom was confused why I was back. He was shocked. To be honest, it was hard being there. (The other patients) don’t know your story. Some of the things I was doing were simple, but they don’t understand the whole purpose of them. Dom was great. He was understanding.” Dom created a unique plan based on Emma’s goals. She wanted to get back to playing the sports she loved. She planned on playing field hockey in college. “I used everything in the clinic. I used the Alter-G.” The Alter-G Anti-Gravity Treadmill uses a pressurized air chamber to reduce the gravitational pull on the body. Emma was able to walk and run in the Alter-G without restriction. “You can set it to take a certain amount of weight off your body. My right side felt really heavy. It took the pressure and weight off. I could run freely without worrying about tripping. It was perfect for my situation. I genuinely thought I wasn’t going to play sports again. That Alter-G really got me back to running and got me ready to play sports again.” 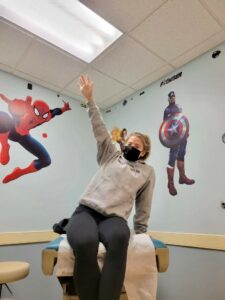 Dom pushed Emma to work hard. He knew it was essential for her recovery, and so did Emma. “I would say I got better every week after I was out of the hospital. Dom was telling my mom and me, the faster I get involved in therapy the faster my recovery would be. I did a lot of band work and used small weights on my right arm. I think that made things move quickly.” Emma worked hard at home too. “They gave tons of bands to use at home. I was also playing with a field hockey stick with one hand. It was two to three weeks into therapy, and I was able to do it much more easily. I was improving!”

Emma spent several months with the Selbyville team. She also had the hole in her heart surgically repaired. “I am completely healed. Early in the morning my hand is a little shaky, but that doesn’t last more than an hour. My vision gets a little blurry on one side, but that’s just a side effect of the stroke. It’s not bad at all. I am pretty much 100 percent better!”

It was hard for Emma to sit out most of the lacrosse season, but with help from her therapists and her 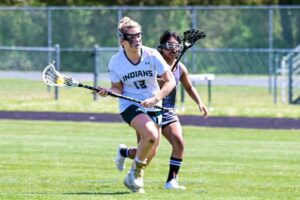 inspirational determination, Emma is back playing lacrosse and field hockey. “After this whole thing, it makes me want to play so much more. I took it all for granted. My first game back I scored a goal. The next few games I was able to stay in the entire game. The physical therapy really helped. I was scared my stamina was going to change but it didn’t, and the agility exercises really helped me.” Dom admires Emma’s spirit which he knows will take her far. “Emma came to therapy every day determined to get better and back on the playing field. She listened carefully and diligently performed her exercises in the clinic as well as at home. Emma was always up for the challenge no matter how big or small the task. She remained positive throughout her rehabilitation and is one of the strongest patients I have ever worked with both physically and mentally.” 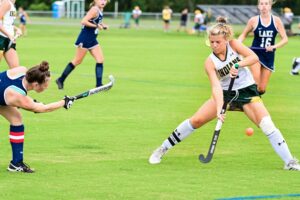 Emma is grateful for the support she received during her recovery. “The people at Phoenix were very encouraging. They had a lot of sympathy for me when I first came in. They talked to me about sports to get my mind off things happening in my medical life. They made it fun too. I just want to give them a big thank you. I couldn’t do it without them. I would probably be on the couch right now if it wasn’t for them.”